Last night at UCL there was a Chomsky fest to launch the book of the contributions to an event that I attended in February 2017. Jackie Walker contributed  a paper to the 2017 Conference (also at UCL) and so was invited to speak at the book launch.

It didn’t start well. Aware of the record of Jackie Walker, UCL  had reasonably put conditions around the meeting – the following antisemitic expressions were rightly ruled unacceptable

1. Suggestions (overt or implied) that Jews as a group or particular sections of the British Jewish community invent, exaggerate or “weaponise” incidents of antisemitism for political or other benefit.

2. Suggestions (overt or implied) that Jews as a group or particular sections of the British Jewish community exploit or exaggerate the Holocaust for political or other benefit.

3. Use (overt or implied) of “dual loyalty” tropes relating to Jews as a group or particular sections of the British Jewish community and the State of Israel – for example that they are “controlled” by Israel or are working on behalf of Israel to the detriment of Britain.

4. Suggestions (overt or implied) that antisemitism is a less toxic form of racism than any other and/or that Jews are less vulnerable to discrimination than other minority groups.

5. Repetition (overt or implied) of antisemitic tropes relating to Jews and money and/oJewish financial involvement in historical events or injustices – for example that Jews financed wars, slavery, etc

Even though the Chair (Professor Garb) suggested that these conditions had been dropped or modified, someone (JVL?) saw fit to put (unsigned) fliers on the chairs entitled “A Defence of Jackie Walker”. And Chomsky’s response to the conditions was posted on the screens:

If I’d been asked, I would have rejected all of these conditions, for two reasons. First, why bring up anti-Semitism and not Islamophobia, white supremacy, and other serious forms of racism? Second, these conditions are an utter outrage. Take the first, stating that it would be antisemitic for anyone to say or imply that any Jewish group has ever exaggerated incidents of antisemitism in the Labour Party or elsewhere. I’m frankly at a loss for words. Would it be anti-Arab racism to say that some Arab group has exaggerated incidents of anti-Arab racism? If so, I’m a hardened Islamophobe, because I know of such cases and have often said so. And so are all journals and commentators on the Middle East, because such behaviour is common — for other nationalist groups as well. Why are Jewish groups immune from criticism, alone in the world? Beyond that there happens to be solid record of exaggerating incidents of antisemitism in Labour. Greg Philo’s recent study documents this in extensive detail.

Is Chomsky seriously recommending this book?

It wasn’t long before the lies started. Walker referred to the book (see link above and here) that was to have been launched at Waterstones Brighton during the Labour Conference as being ‘peer reviewed’. No it has not been ‘peer reviewed’. The ludicrous puff from Ken Loach is hardly ‘peer reviewing’!

Walker’s speech began with her customary litany of victimhood. She called mainstream media “a carnival of reaction, oppression and deprivation”.

The next lie: She said that if you use the term “Holocaust” to describe what happened to Africans, the Labour Party will suspend you!

Then the Chair of UCL Jewish Society asked a perfectly reasonable question about Walker’s history. How could she claim to be an antiracist? (Eg she said that “many Jews were chief financiers of the sugar and slave trade”). She responded by calling his question ‘uncivil’ and suggesting that he had an agenda “probably from the Jewish Chronicle”. I called her out and Professor Garb promptly threatened to throw me out.  So much for free speech. Walker lied (bizarrely) saying that at the meeting in 2017 she had “protected” me! Another Jewish student asked her how it was that all the reports about her could be entirely without truth!

But the pièce de résistance was still to come. In July there was an excellent  Panorama programme (made by John Ware) entitled ‘Is Labour Antisemitic?’ It featured interviews with seven or so disillusioned staff who had resigned from Labour’s Disputes Team.  Only one of them – Ben Westerman – was Jewish.  Walker called the programme “laughable”.  Here’s what she then said: “All 15 people  in the programme were on the Executive of the Jewish Labour Movement”.  My jaw dropped!

This is not just a ludicrous lie.  It is a nastily antisemitic lie – Subtext: “They’re all Jewish so we don’t need to take any of their complaints seriously – they are trying to undermine Jeremy Corbyn”. It violates #1 of UCL’s conditions for the meeting to go ahead. And shames Chomsky for ridiculing the conditions.

Chomsky of course is an antisemitism denier. Just look at this slide, also posted at the meeting: 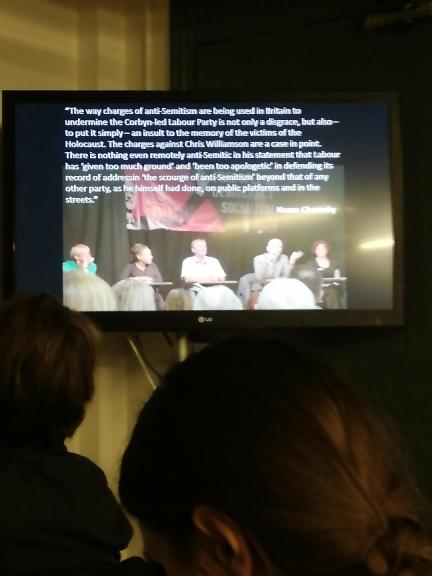 UCL gave a platform to a proven antisemite: Yet another example of UK Universities failing to take the problem of antisemitism seriously.