If you wanted a speaker about the Care of the Elderly you wouldn’t ask Dr Harold Shipman. Similarly if you wanted a speaker about antisemitism you wouldn’t ask David Rosenberg, would you? Errr – wrong – East London Humanists did precisely that. Cockup or conspiracy? Well bear in mind that these ‘humanists’ are affiliated to the National Secular Society which has been pretty obnoxious towards Jews.

There are few things more nauseating than to listen to a renegade Jew telling derogatory lies about Jews to a non-Jewish audience.  Fortunately a band of ballsy Jewish Vigilantes (six women plus me) was at Wanstead Library (at very short notice) to bear witness and speak out.

Here is what we heard, seriatim……

1. Lie: Jeremy Corbyn is probably the most prominent antiracist and antifascist campaigner in parliament.

2. Lie: The allegation that the President of the Board of Deputies does not have democratic legitimacy: (Rosenberg said “those within the Jewish Community who define themselves as leaders put pressure on Labour to adopt the IHRA”).

3. Lie: The IHRA definition of antisemitism “mixes together attitudes about Jews with attitudes to the Israel-Palestine conflict and about Zionism and about the State of Israel”.

4. Lie: The EUMC definition (the precursor to IHRA) was written by just one man, Kenneth Stern (It was the responsibility of a broad-ranging group of representatives from governments and Jewish organisations).

5. Lie: The Fundamental Rights Agency removed the EUMC definition from its website “because they felt it was an inadequate definition”.

6. Lie: Only six countries have adopted IHRA. Truth: As of August 2019, it had been adopted by sixteen countries (Austria, Belgium, Bulgaria, Canada, Czech Republic, France, Germany, Hungary, Israel, Lithuania, North Macedonia, Moldova, Netherlands, Romania, Slovakia and the UK). It is also used by the US State Department and the US Department of Education and the Ministry of Education of Greece. It has been endorsed by the European Parliament, which has recommended its adoption by EU Member States, and by the Organisation for American States. It is used by a number of civil society organisations monitoring antisemitism and was recognised by the UN Secretary-General in 2018. Around 200 UK local authorities and one University have adopted it.

7. Lies: The IHRA definition “will have a chilling effect on comment on the Israel/Palestine conflict”; “opposition to Israeli policy is antisemitic”; “this will cause those who support the Palestinians to doubt the truth of all allegations of antisemitism and people who target the Israeli government might widen their target.”

8. Lie (the worst one, straight from the Soviet School circa 1960): The ‘H’ in IHRA stands for ‘Holocaust’. If a body dedicated to Holocaust Remembrance is responsible for a ‘shield’ to defend a government against questions, it engenders cynicism towards Holocaust Remembrance.

9. The proportion of UK Jews declaring themselves to be ‘Zionist’ fell from 70% to 59% in five years (the 59% figure is taken from the Yachad survey which also found that 90% support Israel’s right to exist as a Jewish State ……. Which equals Zionism ……..)

10. Accusations of antisemitism in Labour are “instrumental, exaggerated and distorted”; the main protagonists are the Conservative Party and right wing leaders of some Jewish organisations. 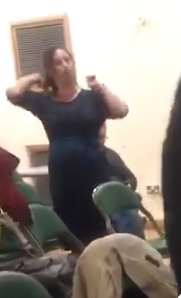 Not surprisingly the meeting broke up in acrimony. One man walked out in disgust. This feral woman was particularly aggressive. Rosenberg (a member of Labour and JVL) smeared me with the EDL lie.

Memo to Humanists: If you want a speaker on antisemitism, don’t ask someone who is part of the problem!

Paul Kaufman who chairs East London Humanists is Jewish. He is a member of the anti-Israel group Jews for Justice for Palestinians. JFJFP does not accept the IHRA Definition. Presumably that is why Rosenberg was invited. So it WAS conspiracy – not cockup. It appears that the Chair of East London Humanists deliberately invited a speaker who denies antisemitism and rejects IHRA to speak on the topic.

Note the link to the antisemitism-denying Jewish Voice for Labour. Richard Kuper is a founder of JFJFP and an Officer of JVL.

Kaufman is also opposed to faith schools and his group held a meeting opposing religious circumcision.

Assuming it is the same man, he also signed an open letter in 2015 attacking the Jewish Chronicle for highlighting Corbyn’s links to antisemites and Holocaust deniers. I can’t find evidence that he is a Labour member but it seems likely.

Here is a video of the chaos at the end of the meeting.

Me: “You wouldn’t have a speaker who is Islamophobic – why do you have one who is antisemitic?”

Me: “The IHRA says you can criticise Israel the same as any democratic country – that’s what he didn’t say – he’s a racist speaker”

Rosenberg: “I would like to point out that the person who has disrupted this meeting is very happy to work with members of the the English Defence League and the British National Party”

Me: “I have never worked with the EDL. You’re a f*cking liar”

Ms Feral has outed herself it seems

Update: On 20 April 2022 Maddie Schumann was found GUILTY of assault by battery and GUILTY of Malicious Communications – sentencing Barkingside Magistrates 25 May 10am

This case was sentenced on 20th June 2022 and the result is as follows:

Sentence:
The Court found that this offence was religiously aggravated.

To pay costs of £625 to the Crown Prosecution Service.