Some terrific and jaw-dropping research has been published on Twitter…………

Here are the astonishing results: 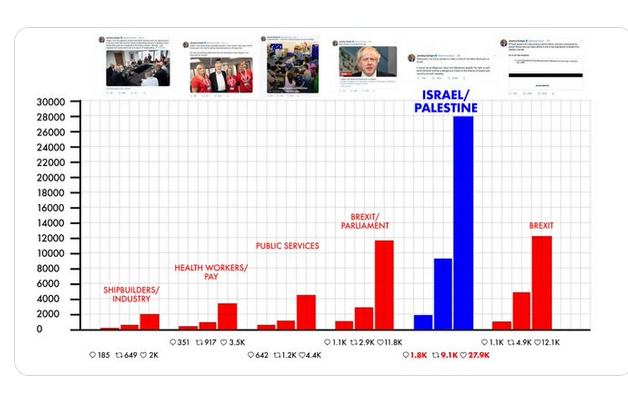 For each tweet, the first bar shows comments; the second, retweets; and the third, ‘likes’. (The six screenshots at the top are the tweets which can be seen by clicking on the above Twitter link – here again).  So Corbyn’s tweet about Netanyahu’s pre-election rhetoric got 28,000 ‘likes’ versus just 2,000 ‘likes’ for the tweet about his meeting with the workers at Harland and Wolff, the shipbuilding business in Belfast which is in administration. Even the tweet about ‘Yellowhammer’ – the impact of ‘no deal’ on the price of food and fuel, which will hit the poor hardest – only got 12,000 ‘likes’ – less than half the number for the Netanyahu tweet.

@LaughingDevil1 quickly ran the same test for all Labour Shadow Cabinet members. They analysed the number of ‘Likes’ for the four most recent Tweets (not replies) of all of the 28 Shadow Cabinet members who have a Twitter account (all but 4 of the 32 in the Shadow Cabinet). The cutoff was 11:59pm on 11 September.  So 112 tweets in all (4 times 28).  Here is the result:

Israel comes in second place, even though it was the subject of only 2 out of the 112 tweets! 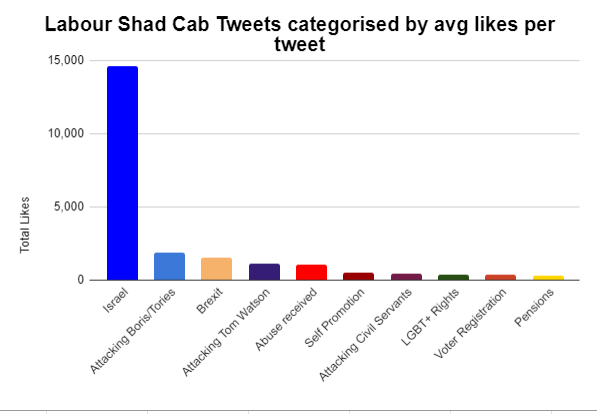 Just think about this. The UK has been through possibly the most tumultuous few weeks in living memory. Parliament has defeated the government six times in six days; it has mandated the Prime Minister to ask the EU for an extension for Brexit; there was uproar about proroguing Parliament; there was suspicion that the Prime Minister had lied to the Queen; and Parliament forced the government to publish the Yellowhammer document about the possible consequences of No Deal. In Israel on the other hand there have been no major events, no major clashes in Gaza.

Yet when Jeremy Corbyn or shadow Cabinet members tweet about Israel, the response from their supporters is massively greater than when they tweet about any of the epoch-making recent events in the UK!

Hatred of Israel is the glue that stops Labour falling apart and Corbyn, Milne and the rest know that only too well. As David Collier brilliantly showed, that hatred has been instrumental in Corbyn’s leadership of the Party.

Remember this at Conference last year? 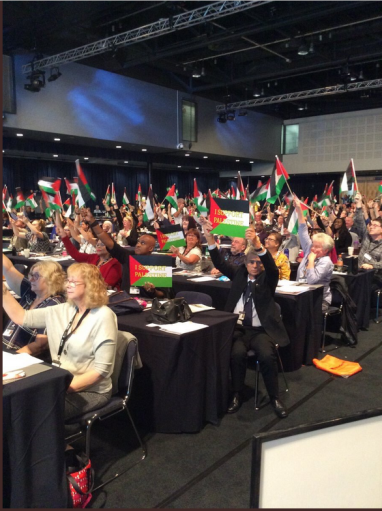 You can bet something similar will happen this year, in just 12 days’ time.

Does it not go without saying that a Party whose Weltanschauung is rooted in obsessive confected hatred of the world’s only Jewish state should be kept as far away from power as possible?

@LaughingDevil1 has done another test, this time of Tweets by ALL Labour MPs with Twitter accounts. The chart below shows average ‘Likes’ for each Tweet and average Retweets for each Tweet. 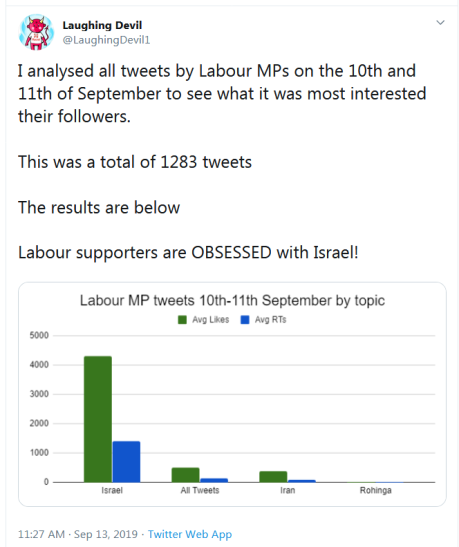 The conclusion is the same.