Jenny Manson is co-Chair of Jewish Voice for Labour, an organisation which exists solely to whitewash antisemitism in the UK Labour Party. 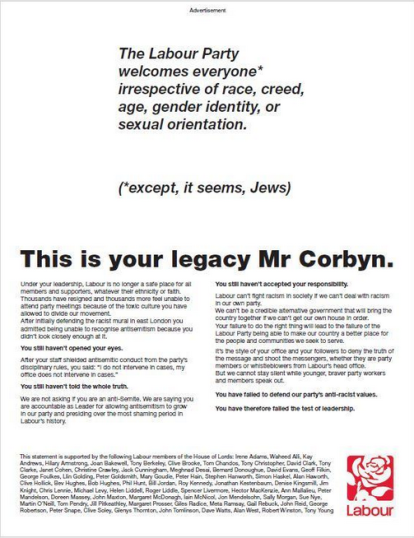 On 17 July the Australian Broadcasting Corporation (ABC) gave Manson a 9-minute slot to respond to the advert in The Guardian the same day (funded and signed by 64 Labour Peers (around 1/3rd of the total of Labour Peers)) denouncing Corbyn’s failure to deal adequately with antisemitism in the UK Labour Party  (this was after the Panorama programme on 10 July).

In short, Manson’s response is a pack of lies and shame on ABC (a) for giving her  a platform (b) for failing to invite a second guest to rebut her lies (as I did on BBC World last September).  The ABC is a public service broadcaster with impartiality obligations similar to those of the BBC. When black football players complain about racism, does the ABC feel the need to call on someone to question their sincerity? Or when Muslims denounce Darren Osborne?  Are Jews the only minority whose sincerity is questioned when they complain about racism?

Let’s focus on what Manson said, remembering that she identifies ‘as-a-Jew’ for the sole purpose of vilifying Israel.

“There is no evidence that the Labour Party harbours antisemitism any more than any other Party, in fact it harbours it less than some other political parties in Britain. “

LIE #1 – there is plenty of evidence.

“Antisemitic views are less in the Labour Party now than they used to be”.

“These 60 Peers are Peers who have opposed Jeremy Corbyn’s leadership right from the start.”

LIE #3 – Here for example is Lord Meghnad Desai praising Corbyn’s manifesto for the 2017 election. Here is Lord Spencer Livermore speaking of a ‘huge opportunity’ for Labour; he would hardly say that if he had been opposed to the Corbyn leadership. For many others – eg Hector MacKenzie and Doreen Massey and Sue Nye – there is no evidence that they have ‘opposed Jeremy Corbyn’s leadership right from the start’.

“One of the MPs who left Labour said that she’d been hounded by antisemites but she never mentioned that they were from the far Right and not from Labour.”

LIE #4 – Manson does not name her but this must be Luciana Berger MP. Of the six people convicted for threats and abuse against her, two of them – according to Ms Berger herself – came from the Left. More here.  And here.

“Naz Shah, Chris Williamson, Ken Livingstone: None of these three has said or done anything antisemitic at all.”

LIES #5, #6, #7 –  Naz Shah even admitted it! Williamson is an alleged Jewbaiter who has defended and supported individuals who have made deeply antisemitic statements.  Livingstone suggested that Hitler supported Zionism.

“The Research that was commissioned by a Jewish organisation a year ago could not find evidence that antisemitism in Labour has increased.”

“I’ve been in the Labour Party for 50 years, I have not seen one incident of antisemitism.  It’s worse in the Conservative Party. “

SEE LIE #1 ABOVE.  Ironically shortly after the interview, Jeremy Corbyn himself publicly admitted what Jenny Manson had denied – that UK Labour has a ‘real problem‘ with antisemitism; that ‘no-one should dismiss the concerns they’ve [ie UK Jews] expressed about what has been happening in the party‘; and that ‘anyone who denies that this has surfaced in our party is clearly actually wrong and contributing to the problem‘.

“If the story was true we would not have won the Peterborough by-election.”

LIE #8 – Complete non-sequitur. Labour won Peterborough despite being institutionally antisemitic.  This is the utterly cynical calculation that Seamus Milne presumably makes: that antisemitism is not a vote loser for Labour. That’s why it’s so important to keep reporting it on the media in blogs like this one and to show zero tolerance.  Milne has to be proved wrong.

“Panorama had no evidence and no alternative voice”

LIE #9 – No evidence?  We must have been watching  a different programme.  I saw a group of serious and articulate young people who had landed their dream job working for Labour but were then subjected to impossible pressures to violate the rules. One ended up thinking of suicide, others had to be prescribed medication for depression.

As for ‘no alternative voice’, the irony of that – in a 9-minute slot with no countering speaker and an interviewer who was frankly pathetic – can surely be lost on no-one.  Plus, what alternative voice was there supposed to be? Someone to deny that Sam Matthews was driven to the brink of suicide by the pressures on him?

The ABC has received several complaints about the broadcast. In particular Peter Wertheim – the co-Chief Executive Officer of ECAJ which represents the Jewish Community in Australia – has complained thus:

Three days before this interview, Howard Jacobson, Simon Sebag Montefiore, Sir Simon Schama, Neil Blair, Tracy-Ann Oberman, Rabbi Julia Neuberger, who are well known Jews in the UK with progressive views had a joint letter published in The Guardian (UK) entitled “The poison in UK Labour’s soul” in which they completely contradict the views put forward by Ms Manson:

For balance and fairness, I ask that you now arrange to interview one of these 6 people on the same program. Their views on this issue coincide with those put forward by all of the Jewish communal organisations in the UK, which have argued that there is a significant problem of antisemitism within the UK Labour Party.

Here’s the ABC’s not very helpful response to Peter Wertheim:

Thank you for your email regarding the ABC News Channel interview with Jenny Manson.

Your complaint has been investigated by Audience and Consumer Affairs, a unit separate to and independent of program making areas within the ABC.  We have carefully considered your concerns, reviewed the content and assessed it against the ABC’s editorial standards for impartiality.

We note the Youtube version of the interview you identify excluded the full context of the segment that was presented by the ABC News channel.  We observe the presenter’s introduction to the segment, which contextualised the interview –

Now in Britain, more than 60 members of the opposition Labour Party have signed a statement accusing party leader Jeremy Corbyn of failing the test of leadership over antisemitism within the party.  Mr Corbyn has long been accused of allowing an antisemitic culture to fester in the British Labour Party, an accusation he denies.

The Labour leader was questioned about the statement in Parliament just a few moments ago.

The report then cuts to footage of former British Prime Minister, Theresa May, speaking in Parliament –

We are satisfied the interview with Jenny Manson, who was invited to respond to the accusations raised in the segment, was rigorous and testing. The interviewer challenged her view that the accusations were weak or repetitious by noting that over recent years nine Labour MPs and three peers had left the party over the issue, there had been a major report into antisemitism within the party, and members of the party had been suspended including former London Mayor Ken Livingstone.

The interviewer put it to Ms Mason – So sometimes there are people who are antisemitic in the Labour Party?  To which Ms Mason conceded – Of course there are, there are antisemitic people everywhere…but it’s not a Labour Party problem. It’s a problem.  The interviewer then asked why Labour wouldn’t adopt an independent complaints process because there are reports that there are more than 800 complaints of antisemitism that are being investigated by the Labour Party.  He asked what Labour was going to do to emerge from this crisis because it had been going on for years and the party could not seem to overcome or satisfactorily address the claims that it was antisemitic and failing to address the problem.

We are satisfied the segment presented sufficient context to make it clear to the audience that the British Labour Party had a major, long-standing issue with antisemitism, to the point that significant numbers of its own members had publicly criticised the party and its current leadership over the issue or decided to leave the party altogether, that it was handling in excess of 800 complaints on the issue and was now in crisis as it had not adequately addressed the issue that had dogged it for years.

The issue of antisemitism within the British Labour Party has been covered by the ABC News Channel, and will continue to be covered, on a newsworthy basis over time.  Impartiality does not require that every perspective receives equal time, that every interview be countered with an opposing interview, or that every facet of the issue is presented within the one segment.

We are satisfied that Ms Mason was appropriately identified as co-chair of Jewish Voice for Labour, and that the audience was not lead to believe that her organisation spoke for all British Jews or even Labour voting Jews.

Please be assured that your reaction to the broadcast has been brought to the attention of ABC News management.  Thank you for allowing the ABC the opportunity to respond to your concerns.

The ABC Code of Practice is available online at the attached link;

Should you be dissatisfied with this response to your complaint, you may be able to pursue the matter with the Australian Communications and Media Authority http://www.acma.gov.au