For shouting at antisemites, we were prosecuted. Please help us meet our legal costs. Many thanks. 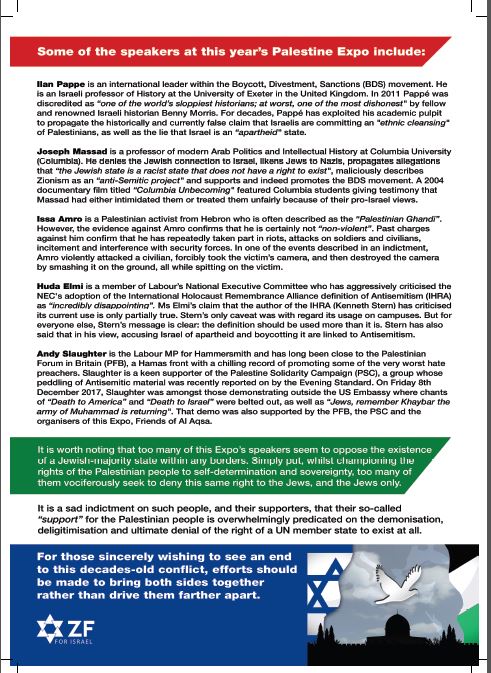 David Collier has described the pernicious way that young visitors to the event were brainwashed to hate Israel by means of games such as ‘Apartheid wall: See how you interact with your family during a meal with the Apartheid wall cutting through the dinner table.‘

The event featured 42 hour-long conference sessions, all of which demonised Israel. Examples of titles: BDS; Prevent & Palestine: The Erosion of Activism through Counter-Terrorism; One State: The Future. Analysis of the speakers a few weeks before the event revealed that as many as 37 had a history of either reportedly antisemitic comments or Israel demonisations. In the former category were Osama Abu Irshaid, Hatem Bazian, Neve Gordon, Joseph Massad and Glynn Secker. A few speakers were added after the analysis was done. Rebecca Gould is a Professor at Bristol University. The university authorities failed to discipline her after she wrote an article suggesting that Jews profit from the Holocaust.

On the other hand the following speakers were removed, or removed themselves: Neve Gordon, Sarah Lasoye, Asad Rehman, Steven Saxby, Glynn Secker, Andy Slaughter MP. Possibly Slaughter and Saxby (a Labour candidate) pulled out because of the impending Panorama investigation of antisemitism on 10 July.

Particularly ludicrous was to fly Mandela’s grandson in from South Africa. He knows sweet FA about the Middle East but that didn’t stop him making constant inappropriate comparisons with South Africa under apartheid.

Videos of the five sessions on Saturday in the auditorium are available on the Palexpo website. I have been through the 7+ hours of recordings; here is what I found (bios of the speakers whose affiliations are not shown can be found here).

This session contained inflammatory lies about Israel’s treatment of Muslims and the Al Aqsa Mosque.

Laila Hassan (Women in Hebron): You will cry when you see how you can’t pray in your Mosque.  We need your help. We need people to support how we live under occupation. We don’t need help from your government. We know your government, they support the Israelis, the Jewish people.  When they found us they kicked us out. We are victims. The Israelis, they focus on Al Aqsa Mosque and Ibrahimi Mosque because they hate Muslims.  We never hated them because they are Jewish. They are fighting us because of our religion. They divided Al Aqsa. It’s two places, a synagogue and a Mosque.  The settlers go there every day.

Osama Abu Irshaid: Christians and Muslims are being discriminated against by Israel. Since 1967 Israel has failed miserably in guaranteeing the rights of the three religions. Everyone knows that Muslims are being banned from praying in their own Mosque. Christians are being banned from their churches. Israel is a combination of a traditional colonial enterprise and apartheid regime mixed with historical and religious narratives. Creating a false Zionist narrative is a deliberate attempt to deny the indigenous people of Palestine their rights and their own land. (Q+A) Since 1967 Israel has failed to prove that a single stone dates from Before the Roman Era or the Muslim Era. This is documented by the UN and the British. The Palestinians are being dehumanised. They were never offered real peace. No-one talks about the inhumane siege of Gaza. People were put on a diet; their calorie consumption was counted.

Hassun El Zafar (recently produced ‘My Name Is Rachel Corrie’ in Sheffield), Moderator: ISM was a neutral human rights organisation; it was disbanded by the Israelis.

This session contained several falsehoods – like ‘the majority of European Jews are converts’ (!)

Joseph Massad: Jews have become a minority in Israel plus the territories gained in 1967. So the Nation State Law was needed to underpin Jewish minority rule. The majority of European Jews are converts. In 1967 Israel set up an academic enquiry to study how to expel more Palestinians. There are 65 laws which privilege Jews.

Zwelivelile Mandela:  Apartheid in Israel is the worst form of apartheid that we have ever witnessed.

Ilan Pappe: The MSM never mentions Gaza but it mentions every detail of antisemitism in the Labour Party. Why does it never mention Gaza? Either it’s too timid, or it’s bought, or it’s ignorant. I think one day we will see a Palestinian leadership that talks of a One State Solution. The BBC must stop beinga  broadcaster on behalf of Israel and must begin to tell the truth.

This session saw a call for a One State solution – which would mean the end of Israel as we know it. It also saw FOA founder Ismail Patel slandering Israel.

Zwelivelile Mandela: We continue to call for a One State solution

Ismail Patel (founder of Friends of Al-Aqsa): BDS is non-violent, a language Israel does not understand and therefore which it cannot counter. If BDS was antisemitic how can some Jewish people support it? Israel is being antisemitic by trying to deny them their right to speak out, it is denying their Jewishness. Israel and its supporters are weaponising the charge of antisemitism to continue with its colonialist and racist project.

Deal or Disaster of the Century

This session featured the falsehood that criticism of Israel is deemed antisemitic, together with other allegations that Jews misuse the charge of antisemitism. Only antisemites make these kinds of arguments.

Gideon Levy: We face a new stage in which criticising Israel becomes not only impossible but almost criminal. You dare to criticise Israel – you’re an antisemite. My friend Roger Waters is an antisemite? This man of conscience whose father was killed in WW2 as an ambulance driver in Italy? Corbyn can be a major change, if the miracle happens.

Joseph Massad: Israel wants to say that it has the right to kill Palestinians, to steal their land, to establish its state, because it is Jewish, in the name of Jews, and then at the same time it wants to make sure that no-one can criticise it, by claiming that if they criticise it, they are criticising its Jewishness.

In another session an Arab member of the Israeli Knesset,  Yousef Jabareen, called for a boycott of Israeli goods. Hopefully he will face disciplinary measures. It is entirely wrong – indeed treasonous – for an MK to travel abroad and attempt to do harm to their native country.

This event should never have been allowed to take place. It simply fuelled antisemitism. Requests to the Home Secretary to cancel it went unheeded; maybe this is due to the weakness of the government. Ironically at the same time as he failed to cancel the event or refuse entry to the antisemitic speakers from outside the UK, Sajid Javid was telling us how much he loves Israel and that ‘I’ve been determined to safeguard our Jewish communities from this creeping antisemitism which not only fuels hate crime, but also extremism and even terrorism.’

UK Lawyers for Israel also contacted the owners of Olympia but the hatefest still went ahead. If there was an event as offensive to Muslims or Christians as this one is to Jews, it would not be allowed to happen. Yet again, Jews are seen as a pushover.  Let’s hope this Israel Hatefest aka Palexpo was the last. It certainly made a thumping loss. Attendance was sparse and the costs of hiring the venue plus travel and hotels for the speakers would have been well into five figures.

Look what happened at the session entitled ‘Britain, Zionism and Jewish Resistance to Israel‘ on Saturday. Greenstein called Israel “Hitler’s bastard offspring”.  A Labour Councillor, Leah Levane, was on the Panel and there is no indication that she protested at this vile antisemitic slander.

And here is a video about the event.