Dear Mr Corbyn – Is this ‘Irony’? Because I am a Zionist and according to you I don’t understand what it is ….. An Israeli-Arab Professor at Tel Aviv University comes to LSE and accuses Israel of discrimination, a “racist ideology” and being a “second rate democracy”. 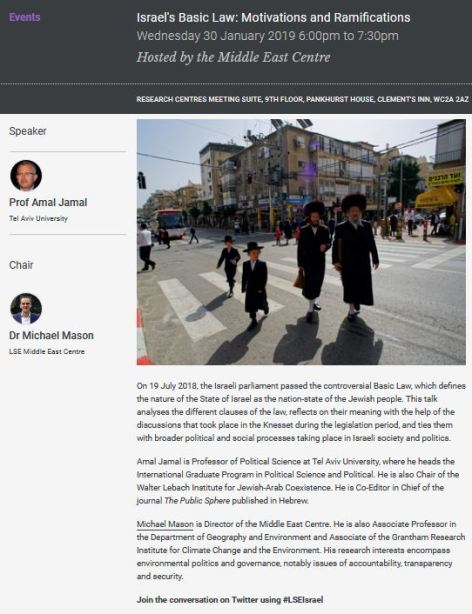 That’s what happened on Wednesday night when Amal Jamal addressed a meeting of around 80 people on the subject of the Nation State Law. (His talk was based on his Chapter in ‘Defining Israel: The Jewish State, Democracy, and the Law’ edited by Simon Rabinovitch).

A taste of what was in store was in Jamal’s first slide (red underlining is mine):

He set out the two opposing views of the Nation State Law. The view that it is simply a codification of existing laws and customs (correct) versus the view expressed by Ahmad Tibi, an Arab Knesset member, that it is “the end of democracy” and “the official beginning of fascism and apartheid.” No prizes as to which one Jamal favours: 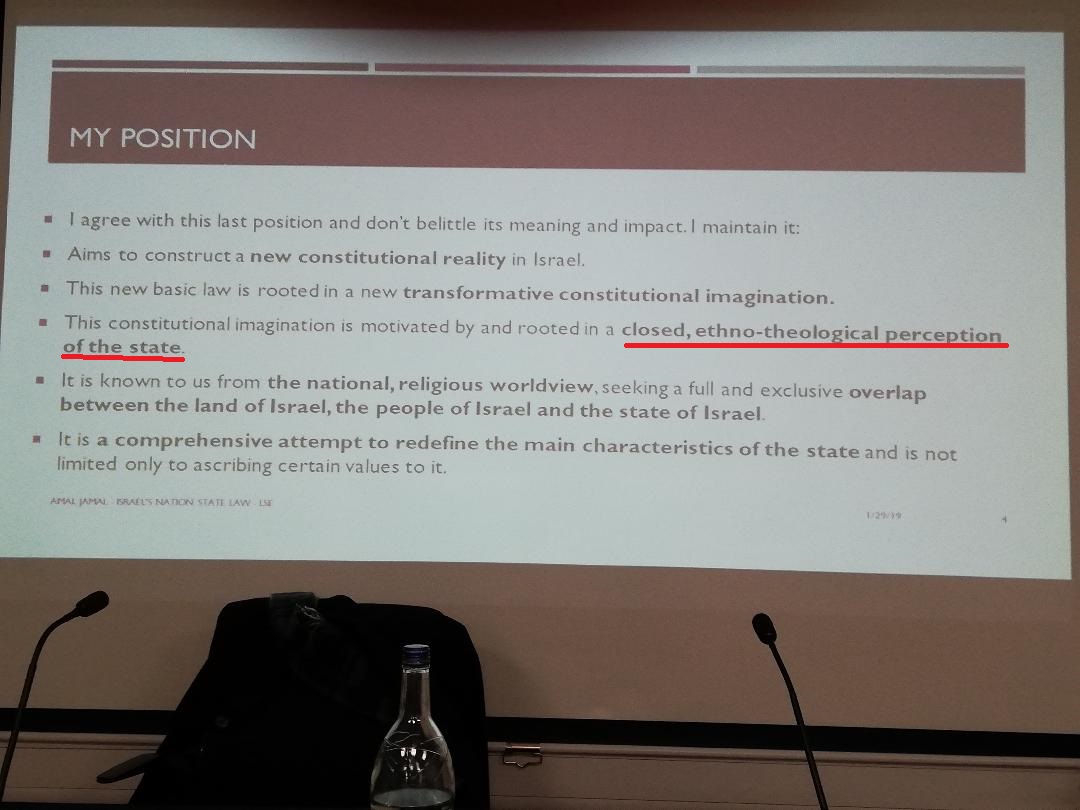 He said that whereas the Declaration of Independence (which he termed a ‘Zionist document’ and he doesn’t use that phrase in a positive way) leaves open the possibility of a secular ‘One State’, the Nation State Law closes this possibility off.

That’s good isn’t it? Because ‘One State’ would need to be enforced and so thousands would die?

Wasn’t that why it was necessary – as a response to the ‘One Staters’?

And that is what Avi Dichter meant when he first proposed the blog.  Jamal of course misinterpreted Dichter’s comment:

Then we had a couple of political theory slides about ‘transformative constitutional imagination’ and ‘productive imagination’.  I could see no value in them, other than attempting to put a veneer of academic respectability around Jamal’s demonisation of Israel. He quoted for example from Martin Loughlin, Professor of Public Law at LSE. Check it out if you’re interested….

En passant we had the lie that Israel is trying to apply Israeli Law in Judea and Samaria. No it isn’t. That’s why there are military courts. It is precisely BECAUSE there is no intention to annexe Judea/Samaria that Israel Law is NOT applied there.

Before long we reached the main point of Jamal’s talk: that the Nation State Law reinforces supposed discrimination against ‘Palestinians’ (he used the term ‘Palestinians’ throughout to describe Israeli Arabs – the acronym PCI stands for ‘Palestinian Citizens in Israel’). He even suggests that no public money is spent on Arab areas  – which of course is nonsense. He said that “for some people, Israel is called ‘Palestine’ “ – more of these ‘dog whistle’ comments below.

Jamal suggested some reasons why the Law was drafted and passed when it was: 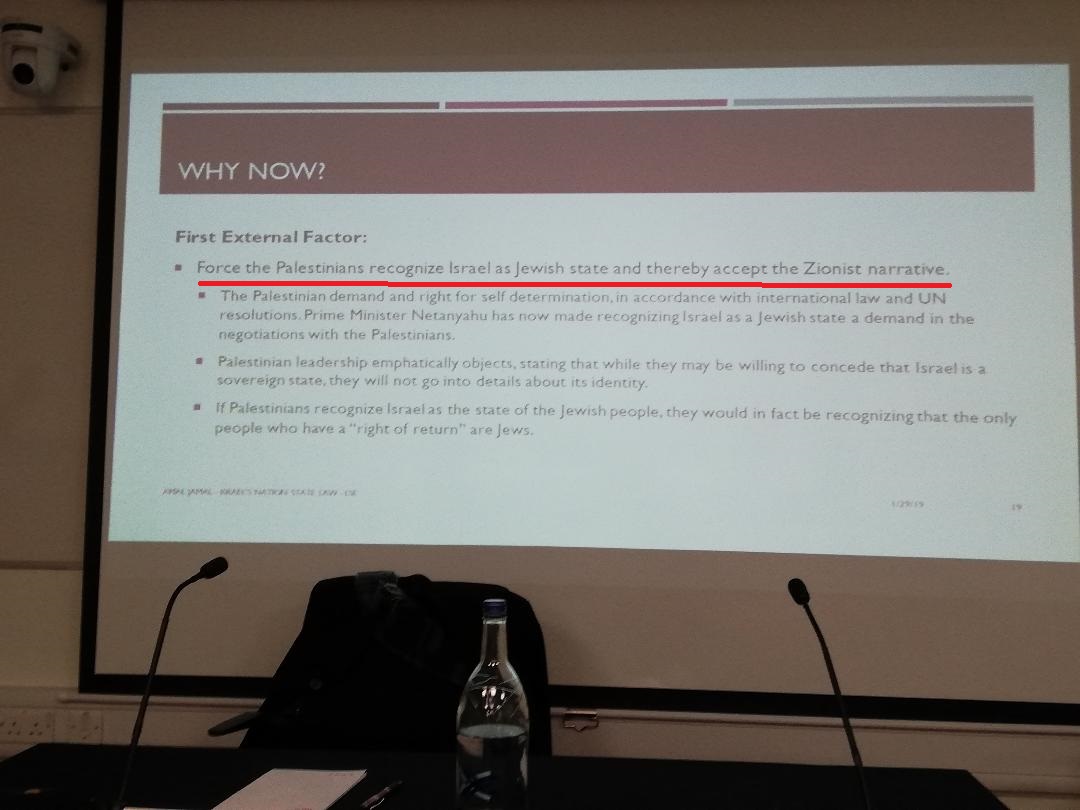 How truly awful that the Palestinians should have to recognise Israel for what it is and what it has been for 70 years: the only country in the world grounded in Judaism.  Their failure to recognise the existence of the Jewish State is just one reason why peace talks have stopped.

Jamal’s ‘Conclusion’ slide is below. Apparently Israel is no longer a democracy (“Democratic values are abandoned”) and the Nation State Law “makes the life of those seeking to call Israel an apartheid state much easier”. Not that Jamal himself thinks that Israel is an apartheid state …. Of course not ….. “I’m the last person to want to put the Jews in jeopardy”.

The Q and A was when things started to heat up. In answer to the first question – from the Chair, Dr Michael Mason, Director of LSE’s Middle East Centre – Jamal said that a few weeks ago, the Mayor of Afula decided – on the basis of the new Law – to “close up all parks to Jewish citizens” (Jamal meant of course close them to non-Jews). This is utter nonsense. The Mayor closed the parks to non-residents of Afula, regardless of their religion – and Israeli Arabs who live in Afula are free to use the parks, the same as Jews who live there. To bar park access to members of a religion would be discriminatory and illegal in Israel just as it would be in the UK. Professor Avi Bell (Bar Ilan University’s Faculty of Law and the University of San Diego Law School) comments (email to me) “It is also absolutely clear that Israeli courts would find illegal any barring of municipal parks to non-Jews; that is the state of the law today.”

Jamal talked about “a very sophisticated racist ideology that is being promoted by the state…. If you’re Jewish then you are a first class citizen, if you’re non-Jewish you are a second class citizen”.

I got the first question from the floor:

“I find it quite ironic that an [Arab] Professor from an Israeli University is coming here and talking about ‘discrimination and apartheid’ [Audience interrupted]. The Basic Law is not anything different from what other countries have. If you take Slovakia for example. The Slovak Constitution opens with the words, “We the Slovak nation,” and lays claim to “the natural right of nations to self-determination.” The same in the Baltics.  The same in Latvia. The Latvian Constitution talks about “…the inalienable right of self-determination”. Let’s talk about languages. Virtually every state in the western world has an official language. Take Spain for example. Castilian Spanish is the basic language. Not Basque. Not Catalan. Catalonia can try to have a state if it wants. In England – in Britain – the language is English. Not Welsh. Not Gaelic. So this is nothing unusual. [Chair interrupted]. Nor does Israel have official religions, there are sharia courts in Israel. Nobody is  discriminated against. The idea that Israel is an ‘apartheid state’ – which I saw on the last slide – is absolute nonsense. So perhaps the best reason for the new Nation State Law is the fact that so many people – traducers of Israel – are attacking the idea that Israel is a Jewish state. That is why Israel needs this Nation State Law. There is nothing wrong with it. Nothing different from other countries. My question: Why is Professor Jamal – a Professor at an Israeli University – why do you come here and lie to people about Israel?”

(For some of this I gratefully acknowledge an excellent column in the Wall Street Journal by Eugene Kontorovich).

Jamal’s only response was to say that in the last slide (see above) he did not call Israel an ‘apartheid state’ – he merely said that the new Law “makes the life of those seeking to stigmatise the Jewish State as an apartheid state much easier”.  How much more disingenuous does it get? I responded that this was an obvious dog-whistle.

A young woman (around 8th row, left hand half of the room looking at the platform) later said she found my views “deeply upsetting” (why?) and that I “didn’t represent” something or other, before asking whether the new Law has rendered impossible a Jewish majority state that is also democratic. In a word – No.

A subsequent question came from Lindsay Simmonds, resident at the Council of Christians and Jews. It was an anodyne question about how ‘nationalism’ and ‘security’ relate to each other. Seriously? Nothing to say about Jamal’s untruths and demonisation of Israel? You only reinforced my long-held scepticism about the value of the CCJ.

More comments Jamal made in the Q+A:

“100% of Palestinians in Israel speak Hebrew.  Almost 96.5% of Israeli Jews do not speak Arabic. This shows that the State did not respect the Arabic language. If it had respected it, it would have taught it to its kids. Now the state does not have to translate documents or allow Arabic to be spoken in the Courts or Parliament. There could come a time when the State refuses to fund the teaching of Arabic in Arab schools”.

This cries out for deconstruction. One, the fact that few in a majority community speak the language of a minority community has no normative implications – how many in the UK speak Welsh or Gaelic? Two, all children in primary schools in Israel learn Arabic. Three, the new law makes absolutely no difference to the use of Arabic in official bodies: for example all documents that were previously translated into Arabic will continue to be translated. Four, the suggestion that the State might stop funding the teaching of Arabic in Arab schools is pure mischievous mendacity  (I heckled him when he said this).

“We know what nationalism did in the 1920s and 1930s in Europe. We do not even want to imagine such a reality in the Middle East in the future” (a dog-whistle antisemitic Jew-Nazi comparison, he is referring to the possibility of Israel committing genocide against the Palestinians).

The final question was whether the Joint Arab List (the Arab Parties in the Knesset) could cooperate with the other Parties? Jamal immediately referred to “Zionist Parties – which means Jewish Parties” Another mischievous lie – all the Parties have Arab members, only a bigot refers to ‘Jewish Parties’.

The Arab Party will never be part of a ruling coalition, he said. Why not? There’s nothing to stop that happening.

I look forward to LSE Middle East Centre’s invitation to a speaker with an alternative view of the nation state law. I will even help by suggesting someone: Eugene Kontorovich. Because I’m sure LSE Middle East Centre would wish to demonstrate that its academic programme is not in any way influenced by its funding……….. (document available on Wayback).