Jeremy Corbyn’s involvement with the vile antisemitic hatefest in the House of Commons on Holocaust Memorial Day 2010 (where I was present) was extensively covered in the media last week. See here, here, here, here, here, and here (7:00) for example. I blogged in 2010 after the meeting, republished here. On Wednesday I published my email exchange with Mr Corbyn before the meeting, warning him about what he was hosting.

But the credit for triggering this particular smoking gun goes to the excellent, unassuming academic historian Dr James Vaughan on Twitter on Monday (his twitter feed is highly recommended). 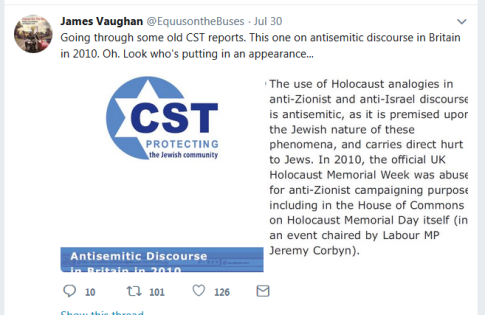 In January 2010, Hajo Meyer (85) was being paraded around the UK by the viciously antisemitic extremist group IJAN whose Charter states ‘Zionism is not just racist but anti-Semitic’. (The hate tour was co-sponsored by the equally repulsive SPSC). Hence my description at the time of Meyer as the ‘amazing dancing bear’. Yesterday I listened to the recording of the meeting and watched the video of a similar hatefest on the Scotland leg of the tour (it’s unclear where the video was shot – he spoke at Glasgow University (!) on 21st, Dundee University (!) on 22nd and at a church (!) in Edinburgh on 23rd).

There is also a video on the In Minds site of Meyer’s speech at Goldsmiths on 26 January 2010. I have watched that too (I was there – see 10/12 here, at the start – Meyer answers me by rejecting the EUMC definition of antisemitism (the precursor of IHRA) and saying that Europe has been ‘blackmailed’ by Israel!) .  Despite all the coverage, no-one has undertaken a forensic analysis of what Meyer said – and Mr Corbyn’s reaction.

I had good reason to warn Mr Corbyn about Meyer. In 2009 I was persuaded (against my better judgment) to be on the panel for a debate organised and chaired by the antisemite Alan Hart, a former BBC reporter (he died in January). On my side was Carol Gould. On the other side, Ilan Pappe (and here) and ….. Hajo Meyer. (You can see the Q+A here in five parts).

Hart had promised that half the audience would be pro-Israel. Of course it wasn’t. As a Chair he was outrageously biased. Not only was he a third anti-Israel speaker, he called on Pappe and Meyer far more often than me and Carol and he allowed them virtually unlimited speaking time while shutting us down quickly. Here’s what Hart wrote after the programme:

But it allowed me to get the measure of Meyer………..who like Alan Hart was a raging antisemite. The fact that he was in Auschwitz for ten months is entirely irrelevant (it goes without saying that IJAN and SPSC hoped that this fact would not only make him immune from criticism as an antisemite but it would even add to his stature in vilifying Zionism and Israel).

The audio of the HMD meeting is not distinct. But since Meyer read the same speech in Scotland and at Goldsmiths, it is safe to assume the London speech was also the same.  Indeed that is my recollection (having been at Goldsmiths too on 26/1/2010). Here are profoundly antisemitic quotes from the London and Scotland sources (additionally the speech was replete with lies but I haven’t included these unless they were antisemitic). Unless indicated, they were said by Meyer:

Judaism in Israel has been substituted by the Holocaust religion, whose high priest is Elie Wiesel

Judaism and Zionism are completely different

Hardly any of the victims of the Second World War had any sympathy for Zionism. Zionism never had any sympathy for the victims during and after the Second World War. They were ashamed of them, they didn’t want them in their country. Ben Gurion called us “unusable human material” … “unusable human material”. [simply a LIE, he never said or wrote that] The victims were Jews and not Zionists.

Zionism is the antipode of Judaism

Political Zionism is based on the terrible books of Joshua and others who are the father and the mother of ethnic cleansing.

Judaism has been substituted by the Holocaust Religion

The Jews are genetically one of the most mixed groups. The may be united by belief but no way are they united by coming from Palestine and no way by having the same genes.

Colonialism is one of the main tenets of Zionism, they call the Palestinians ‘cockroaches’.

They think ‘We Jews have the monopoly on suffering’ – they really believe that no-one ever suffered or will suffer like the Jews did. Therefore ‘whatever we do to the Palestinians is less than what we have suffered and can be done without feeling guilty. They are so paranoid and so obsessed by the Holocaust religion that they will do anything, even dropping an atom bomb on Tehran.’

In Israel there is systematic indoctrination through schoolbooks propaganda. It is the ‘battered child syndrome’. The elders were dehumanised so they dehumanise the Palestinians.

Plus this quote from Haidar Eid, a Palestinian activist (who spoke by phone from Gaza):

“The world was absolutely wrong to think that Nazism was defeated in 1945. Nazism has won because it has finally managed to Nazify the consciousness of its own victims.”

And this one from ‘Jonathan’, an Israeli who refuses to serve in the IDF: He refers to Gaza as ‘A concentration camp of 1.5 million people’

The day before the meeting in the Commons Meyer spoke at Goldsmiths University in London (a replacement for UCL which cancelled). Here are two of the slides he used. The material in them is identical to some of the quotes I have set out above (‘Holocaust Religion’), reinforcing the conclusion that this hate was voiced at the London meeting. 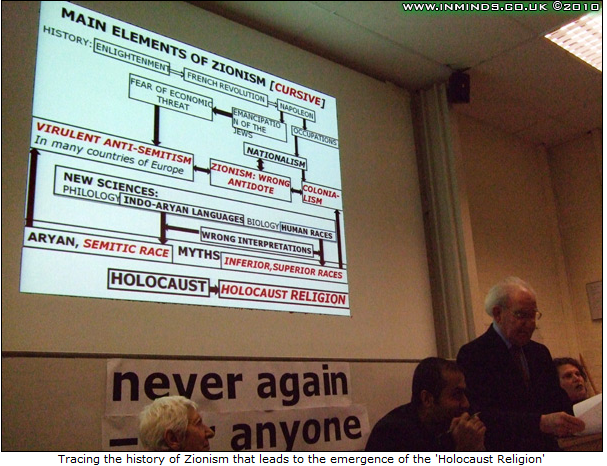 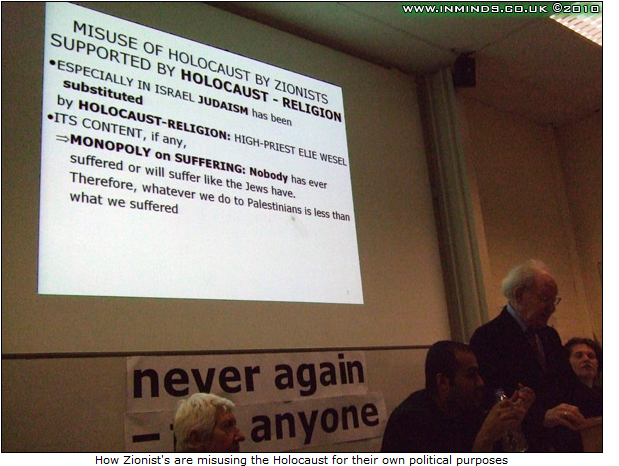 So what was Mr Corbyn doing while this farrago of hate was spewing forth? Well – the audio shows that the meeting descended into chaos no fewer than nine times, as we protested. Did Mr Corbyn tell Meyer to stop his antisemitic diatribe? Of course not. He can be heard on the audio saying to Mayer “Carry On. Carry On. Carry On”

Look at the two of the four examples of antisemitism that Labour has excised from the IHRA Definition:

*Denying the Jewish people their right to self-determination, e.g., by claiming that the existence of a State of Israel is a racist endeavor.

*Drawing comparisons of contemporary Israeli policy to that of the Nazis.

Labour says they have been excluded in order to allow Palestinians to freely criticise Israel. That’s  clearly nonsense. It’s obvious from my description of the 2010 hatefest – and other similar meetings – that they were excluded in order to protect Corbyn and the people around him from accusations of antisemitism.

‘There are too many individual incidents, though, for Mr Corbyn to deal with one by one. The only thing that would stem the tide would be if he recanted the worldview that has landed him in this trouble in the first place. He cannot do that because it is what he believes. It is a worldview he acquired in his youth and has kept with him throughout 35 years in the Commons. It is a worldview that performed unexpectedly well last June and could land him in Downing Street.’

The vast majority of Jews in Britain are praying that it won’t.