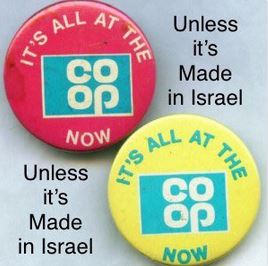 The UK’s Co-Operative movement has a policy of not sourcing goods from certain countries for its food shops. The boycott is expressed thus:

‘where there is a broad international consensus that the status of a designated region or state is illegal …… there are currently only two examples of such illegal areas: the Israeli settlements in the Palestinian Occupied Territories and the Moroccan settlements in Western Sahara.

On this basis, we do not source any produce or own-brand products from the Israeli settlements.

In April 2012, our Board determined that, going forward, we will additionally no longer engage with any supplier of produce known to be sourcing from the Israeli settlements.’

The Co-Op responds to questions about its settlement boycott thus. It gives the misleading impression that it trades widely with Israel:

Point One: ‘….a broad international consensus that the status of a designated region or state is illegal’. No proper Court has EVER said that Israel’s presence in Judea/Samaria is illegal. The UN General Assembly may have passed Resolutions which state this but Israel’s discriminatory treatment in UN bodies is well known.  Israel is perfectly entitled to a presence in Judea/Samaria. It won the area when it won a defensive war in 1967. It offered the land back (and Gaza) in exchange for peace (at Khartoum) but the offer was rebuffed (the ‘Three Noes’ in the Khartoum Resolution). The San Remo Conference (1920) drew up rules for the British Mandate. Article 6 charged Britain with the duty to facilitate Jewish immigration and close settlement by Jews in the territory which then included Transjordan. It has never been revoked so remains valid today. Israel has four times offered to return land to the Palestinians. Each time it has been rebuffed. The Palestinian leadership continues to refuse to recognise Israel.

Point Two: Contrary to the Co-Op’s statement above, there is hardly any produce from Israel in Co-Op shops. I carried out a check on a Co-Op shop (Mays Lane, Barnet) on 25 June 2018. There was produce from Egypt, Zimbabwe, Peru, Morocco, Kenya, Jordan, China, Chile and the Dominican Republic. 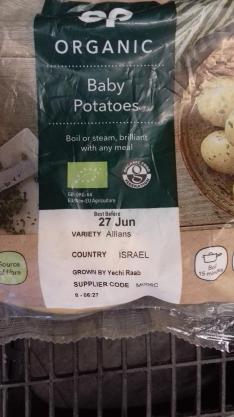 Point Four: The Co-Op cites the Moroccan settlements in Western Sahara but there is no secondary boycott of Moroccan distributors – like there is in the case of Israel. In the Co-Op Mays Lane I found parsley and blueberries from Morocco.

Point Five: If the Co-Op wants to promote ‘ethical shopping’ its policy is absurd – and discriminatory against Israel. For a nation that has faced existential threats every day for 70 years, Israel’s human rights record is superb. I found mangetout from Zimbabwe in the Co-Op. Under Mugabe Zimbabwe had an appalling human rights record. Fact is, the Co-Op’s ethical policy is clearly written to target Israel – and only Israel.

Please show your support for Justice by boycotting the Co-Op. You can join the picket of the new Co-Op in Hampstead Garden Suburb organised by ‘Campaign for Truth’. (Watch the Rod Liddle video in last Sunday’s Sunday Times).

And by signing this petition from ‘We Believe In Israel’.